IT GOES without saying that keeping your home safe from house fires is crucial. This is the reason all Australian homes must have smoke alarms fitted.

Photoelectric alarms are usually more sensitive and are favoured by all Australian state fire authorities.

Apart from these two primary types of smoke alarms, there are two other categories – Carbon Monoxide alarms which target central heating systems in homes and Heat Alarms which are used most often in kitchens to pick up heat instead of smoke.

These two alarms should be used in conjunction with either of the two primary types of smoke alarm.

Should You Choose Battery Powered Smoke Alarms or Hard-wired Alarms? 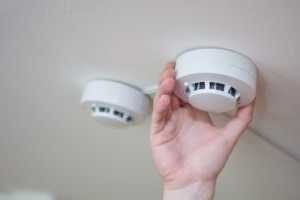 The majority of Australia’s fire authorities favour hard wired alarms. In these, your 240 volt smoke alarm is connected to your home’s electrical supply with a battery powered backup.

If, for some reason, your fire alarms can’t be connected to your mains power, you can use battery powered smoke alarms. In these you are required to use units that are powered by a lithium battery and they must be changed every ten years

What Are the Prices of Smoke Detectors?

The price of standard photoelectric smoke alarms begin around $10 and range up to the $100 markas the models get more advanced.

What Number of Smoke Alarms Are Required for My Home?

Each Australian state has different requirements: 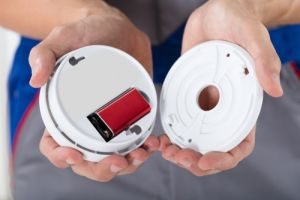 NSW: Fire and Rescue NSW says you must have a minimum of one smoke alarm per storey. In addition, they recommend that smoke alarms are installed in every bedroom, in all living spaces like hallways and stairwells, also the garage. They prefer photoelectric smoke alarms.

VIC: Metropolitan Fire Brigade insists one at least one smoke alarm in every home, and they also recommend photoelectric alarms.

QLD: Queensland Fire and Emergency Services says that a photoelectric alarm is required on every level. THey must be either mains-powered or be fitted with a 10 year battery.

SA: Government of South Australia says you must have at least one smoke alarm per dwelling, specifying a smoke alarm that is mains-powered or 10-year battery type. They might require you to have interconnection as well.

WA: Department of Fire & Emergency Services specifies that dwellings must have a mains powered smoke alarm per storey. Battery powered alarms are permitted if the home isn’t connected to mains power.

ACT: ACT Emergency Services Agency declares homes renovated or built after 1997 must have a minimum of one mains-powered alarm installed. They recommend photoelectric smoke alarms. If your ionisation smoke alarm’s expiry date is imminent, you should consider replacing it.

TAS: Tasmanian Government requires all rental properties and to have at least one 10-year lithium battery alarm or preferably mains-powered alarm installed. 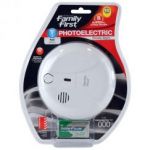 Family First is Australian-owned. Its range of smoke alarm products includes the photoelectric type, which are available from around $13 to $25. They also sell twin packs.

Features a hush button – to silence false alarms – and an escape light to give you a visible point of reference so it’s easier to escape through heavy smoke. The siren on all Family First smoke alarms is 85 decibels. 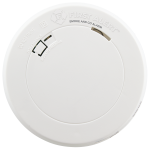 Dual sensors and a built-in 10-year battery feature in their combination photoelectric smoke and carbon monoxide alarm. Their range also features alarms that have an escape light which activates once the alarm goes off. Noise level is also listed at 85 decibels. 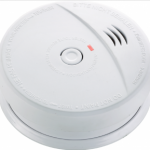 In addition to their smoke alarm range, Fire Pro also offer a wall-mounted gas detector to detect gas leakages. Their price range is from $13 to $50. 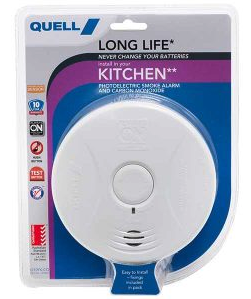 Quell, owned by Chubb, who enjoy more than 100 years of experience in Australia offer an all-inclusive array of smoke alarms. They separate their models by room type, labelling them as Kitchen, Hallway, Garage and Bedroom.

Prices range from $25 to $35 for single packs and twin packs are also available. Features include a low battery warning light and test/hush buttons.

They can also provide interconnected alarms, meaning that when one unit is triggered, all the others will go off.

Easy to install and operated on a 9V battery, it also has a test button and a low battery indicator.

It also features an auto-reset function for after all the smoke clears. It comes in an insect resistant case.

What to Look for When Buying a Smoke Detector 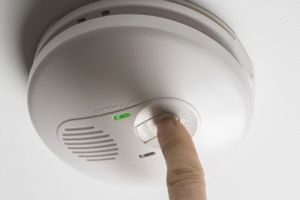 Smoke alarms come with the features required by the Australian Standard, but there are additional functions available:

What is the Bottom Line on Smoke Detectors in Australia?

Smoke alarms are compulsory in homes all around Australia. They should be tested regularly. You should:

Make Your Home 40% Safer From Fire

The company was started in 2009 with a vision of producing products that meet the needs of the general consumer and currently holds standard patents in Australia, U.S. and Canada. Read More….